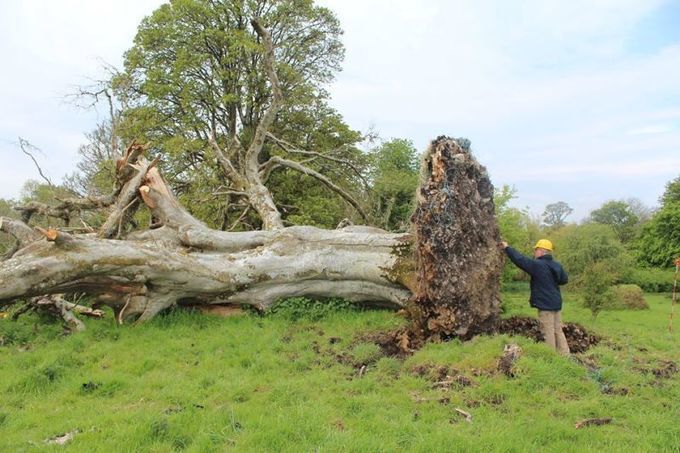 After a violent storm ripped through the Irish town of Collooney, locals were shocked to discover the remains of a 1,000-year-old skeleton hanging from the roots of a fallen tree.

It sounds like the beginning of a story written by H.P. Lovecraft or Robert E. Howard. A violent storm strafes the Irish countryside, uprooting a centuries-old tree. After the storm passes, locals out inspecting damage discover a human skeleton affixed, like an insect in a spider’s web, amongst the roots of the fallen tree. Good thing for them it was daytime—but they’d better be careful where and how they store those bones once night falls! The skeleton, you see, belonged to a vampire who preyed upon the pastoral ancestors of this community over a thousand years ago. At last, in desperation, the living corpse was exhumed and a stake driven through its heart. With the crawling passage of the centuries, the stake, taken from a living tree branch and still green, still alive, took root and grew. In time it became a mighty monarch of the forest, standing tall and strong as civilization encroached around it, felling its brothers and sisters to clear the land for fields and, eventually, highways. Long it stood, a silent sentry, until a terrible wind overthrew it, freeing the evil entity held captive beneath it.

Okay, I made up that last part. Everything after the discovery of the skeleton. In reality there’s no evidence that he was a vampire, or that the tree grew from a stake embedded in his chest. But you gotta admit, doesn’t my version sound more enthralling?