Welcome back to another installment of my topics for Vampire Authors, since there’s a lot of you out there! For you vampire fans, these are all books that you have probably read. If not, get cracking!

They say that imitation is the most sincere form of flattery, and you can certainly see plenty of imitation in the vampire genre. There are many forms of vampire novels now, from steamy paranormal romances to old-school bloody horror and so the would-be vampire author has a nearly unlimited supply of reading material to choose from. Chances are, it’s because you love reading certain authors and their takes on vampires that you want to write one yourself. With that in mind, I’ve compiled a list of 5 vampire novels that, in my opinion, represent the basic building blocks of each of the current types of popular vampire fiction.

Most of these are modern novels, so you won’t find Dracula on this list; it’s a fine novel for its time, but let’s face it, if you’re not familiar with the basics of the Dracula story from the various film adaptations and references, then you probably have no business writing about vampires. And, in case you’ve already read my pick or have a strong aversion to doing so, I’ve been kind enough to suggest an alternate novel for each that covers the same territory.

In no particular order, here they are:

The Vampire Lestat by Anne Rice – How could I compile a list like this and not include the queen of modern vampire fiction? I couldn’t, so I put her first to get it out of the way. You may wonder why Lestat and not Interview, but Interview is a little slow in places and just doesn’t have the flow and characterization that Rice developed when she hit her stride. Louis may have set the model for the modern tragic, brooding vamp, but Lestat is the rock star vamp that has really captured reader imaginations the world over. Rice weaves a fascinating, tragic, triumphant, and compelling tale. No one does vivid, sprawling vampire biographies like Rice in her prime and this novel is still the benchmark any historical/biographical vampire novel should be measured against. Don’t settle for the imitations, read the original and see what created the modern vampire craze!

Honorable Mention: Pandora by Anne Rice. If you’re looking for a female-oriented biography filled with history and romance, then this later Vampire Chronicle by Rice may be what you’re looking for. A more leisurely paced novel than Lestat’s, it still delivers vivid characters, lush prose, and rich historical detail.

The Queen of the Damned by Anne Rice – Why would you read Lestat and not finish the story? With Lestat’s history out of the way, this sequel lets the Queen of Vampires take center stage, dragging Lestat around on a globe-spanning spree of destruction, ecstasy, and a glimpse into the very origins of their race. If Lestat was a bit light on the action, then this volume more than makes up for it. This remains the super-powered vampire showdown to end them all and Rice’s unique vampire mythology again set the standard for all that have followed. And, no, seeing the wretched movie version does not count!

The Hunger by Whitley Streiber – For those who prefer their vampires a little more non-traditional, but with a little more scientific plausibility, Whitley Streiber’s subtle, creepy, bisexual Miriam Blaylock is the original vampire femme fatale. A disturbing and unique take on the vampire legend, Steiber’s creatures are a separate species rather than undead corHopses, capable of the full range of emotion but a tragic flaw for those they choose to love. This is absolutely a vampire novel for adults, not because of any graphic content, but because the complex emotional territory Streiber journeys into is best appreciated by those who have lived and loved and lost. If you read this one years ago when you were young, I urge you to give it another pass and see if you don’t have a different reaction. This one also became a stylish 80s movie, but to really appreciate the emotional subtexts in the story, you really must read the novel.

Honorable Mention: The Vampire Tapestry by Susan McKee Charnas. This very unusual vampire tale presents a truly alien and unique vampire who may well be the last of his species. Far less romantic and more pragmatic than most vampires you’ll ever meet, this book presents a series of episodes in the life of the vampire Weyland. This one’s not for all tastes, but certainly one of the more unique takes on the vampire idea you’ll find.

I Am Legend by Richard Matheson – The grand-daddy of vampire apocalypse novels, and maybe even zombie apocalypse stories, this grim, slow burning novel bears no resemblance to the various movie adaptations that have been based on it (with the exception of Vincent Price’s The Last Man on Earth, which comes close). Some readers will find it slow, but the horror of the vampires in this novel lies in their numbers and relentlessness. Fans of The Walking Dead and similar fare will appreciate the bleak atmosphere, but what will truly surprise readers is the profound philosophical questions Matheson raises with masterful understatement.

Honorable Mention: ‘Salem’s Lot by Stephen King. The master of modern horror gave us this wonderful modern vampire classic which is often described as “Dracula in a small Maine town.” While that description is accurate, this novel is so much more. Masterful characterization of people large and small makes the town of the title live and breathe. The setting is so vividly drawn and lovingly rendered that you almost don’t notice the absence of the undead for a large portion of the novel. Atmosphere and steadily building dread replace King’s usual shock and awe in this early masterpiece. Those who like their vampires monstrous and traditional need to take a lesson.

The Dresden Files by Jim Butcher, but Grave Peril if you have to pick just one – Okay, you’re saying, but what about us Urban Fantasy writers? Jim Butcher has created a fully-realized and consistent fantasy world composed of everything you’ve ever heard of in a fairytale or mythology book. The thing to read Butcher for is how approachable and sensible he makes the fantastic seem. By having a solid foundation to build on and working to keep the rules clear, his wizard Harry Dresden strikes a crucial balance between being powerful enough to handle the ever-escalating threats he encounters while never becoming so chock full of powers that he ceases to be interesting. Who Harry Dresden is matters much more than the nifty spells he can cast and the restrictions he places upon himself elevate him to a combination of Phillip Marlowe and Harry Potter. The reason this series fits this list, of course, is because Butcher’s clever approach to vampires having different “courts” each with distinct powers and weaknesses allows him to get mileage out of all the various vampire archetypes. The fact that the series has sustained fourteen novels so far with no decrease in quality or sales also proves that Mr. Butcher is doing something right and that’s always worth studying.

Honorable Mention: Guilty Pleasures by Laurel K. Hamilton. Not only was it one of the first such series to hit the bestseller lists, but its heroine Anita Blake remains one of the seminal ass-kicking heroines in fantasy literature. In the last few years, the series has sadly degenerated into Mary Sue wish-fulfillment, but back when she was on her game, nobody did this kind of monster-mash Urban Fantasy better than Hamilton. The first eight novels are well worth the read for any aspiring author looking to dip into that well. Characterization was key in these early novels along with a strong voice and gritty realism that balanced the fantastic elements. For those who have already begun their series, it might be worth reading through the Anita Blake series to decide for yourself where it “jumps the shark” or even if it does. You can learn as much from other people’s failings as you can from their successes.

Well, there you are. If you look over the list and you’ve read them all, then good for you! Still, some of these deserve a second reading with a critical eye, especially if you’re planning to write something in that vein. C’mon, how could I resist at least one vampire pun on a subject like this?

Have a bone to pick with some of my recommendations? Did I leave a masterpiece off the list? Let me know in the comments below! 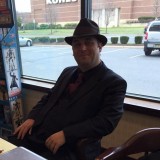 how about varney or the mysterious stranger?

I was very fond of p.n. elrods vampire files myself. glad im not the only one that got sad at Anita’s plot…and lack thereof after l.k.h. became “famous” jim butcher’s were cool, but im surprised kim harrisons hollows series didn’t come up

What about Chelsea Quinn Yarbro’s Saint Germain Chronicles? I like P. N. Elrod’s work too, but someone beat me to the punch there.

oh I read so much i’d nearly forgotten about those!

The reason I didn’t include Dracula or Carmilla is that they are “classics” and I assume that any vampire fan has read them. They also aren’t likely to be as accessible to modern readers. This was primarily meant to give modern fans and aspiring authors some modern references that show where the genre is today.

In comic books there is “American Vampire” by DC Vertigo. It is by Stephen King (first few issues.) and Scott Snyder. Stephen King wanted to return vampires back to nasty and evil so he got the idea of a new, nasty American vampire species. Skinner Sweet and Pearl are a new breed of vampire. Skinner Sweet is extremely ruthless. He goes after the snooty European vampires. And he whops their butts!