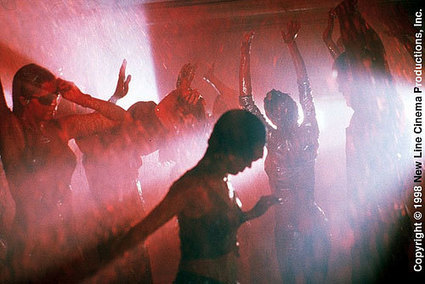 Vampires, freaks, and oddly inclined ravers are being invited to the world’s first ever “blood rave” to be held in Amsterdam this coming Halloween.

Supposedly, a group of anonymous organizers are planning to stage, on Halloween night, at some as-yet undisclosed location in Amsterdam, a “Blood Rave” reminiscent of that opening club scene in the movie BLADE, wherein revelers get doused with blood from the ceiling, sort of like an en masse FLASHDANCE homage from Hell. How much blood? Some 1300 gallons of it. Now Amsterdam is an awfully big place, so I’m thinking they’re gonna have to do a better job of advertising this soiree if they expect anybody to show up. Of course the whole “rave” culture is keyed into being clandestine and rebellious, breaking laws and ignoring public statutes and all that. And I can well understand why they would want to keep everything on the down-low, if this thing is legitimate. But I doubt that it is.

For one, where would this blood come from? No one has stated that it’s supposed to HUMAN blood—indeed the mere possession of such an amount of the latter would probably be illegal in and of itself—and certainly dumping it on people would be against the law, even in Amsterdam, I’m thinking—thus we could infer it would be animal blood, procured from some accommodating slaughterhouse. Only I’m pretty sure dumping animal blood on people, all CARRIE-style, would be in violation of all sorts of health codes, again, even in Amsterdam. What they will actually be dousing the tweakers with is 1300 gallons of FAKE blood, I suspect. I also doubt that the partiers will even notice.