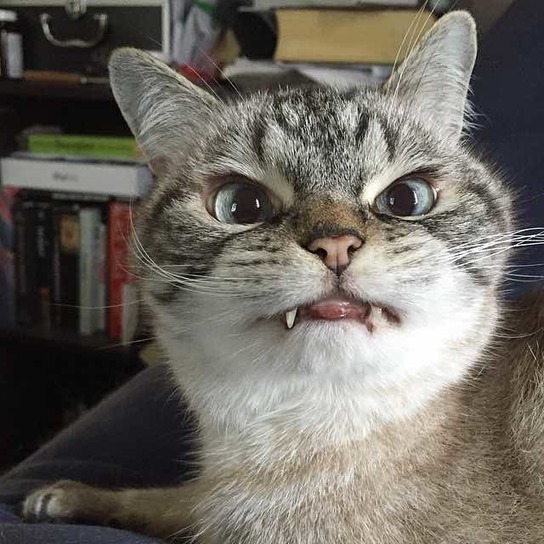 Meet Loki, an adopted cat, who has quite a unique face. She will steal your heart with those vampurr fangs!

Isn’t this the most adorable vampire kitty you’ve ever seen? Her owners named her Loki, which is kind of perfect, and state that they rescued her from a shelter. Though the article doesn’t say one way or the other, I’m left wondering if Loki’s personality fits her name and sinister (but still adorable!) appearance. Perhaps if a vampire were to choose to turn into a cat instead of a bat or a wolf (and remember that witches were believed to frequently transform into cats during the Middle Ages), it would look exactly like this. But how could that cute, cuddly fuzzball ever be guilty of evil machinations?

I used to have a cat visit from a neighbor’s house, and he had vampire fangs. Unlike Loki, he was jet black, which made him look even more nefarious. I don’t know what his real name was, but my lovely better half nicknamed him “Alucard.” Despite his name and his looks—and I think his fangs were even more prominent than Loki’s—he was a good-natured sort, always up for petting and quick to purr. Also I only saw him during the daytime (you can’t expect to see a black cat at night, now can you?), so I’m pretty certain he wasn’t one of the undead in disguise. Judging by the photos of her, which appear to have been taken during the day, neither is Loki.

Send us an email at [email protected].com