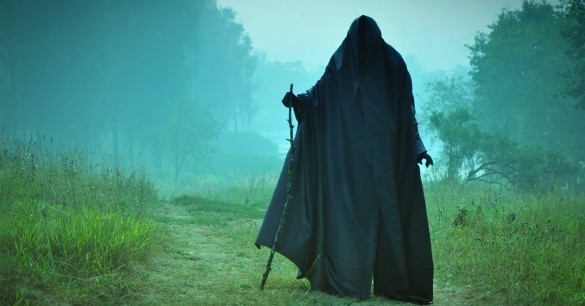 There’s no doubt in my mind that when it comes to the matter of the Men in Black, there is a direct connection between these menacing characters and a wealth of other supernatural phenomena.

Okay, here’s a primer for those not already familiar with the supernatural theory of the Men in Black/UFO connection. (As opposed to what we’ll call the “straight” theory that UFOs are spacecraft from other planets and the MIBs are shady government agents.) The theory postulates that there is SOMETHING out there beyond the physical, beyond the three-dimensions that surround us and which we perceive; something intelligent, which would imply life, but a form of life altogether alien to our way of thinking. Something living and intelligent and decidedly NOT friendly. In the past, this whatever-it-is/whatever-they-ares appeared to people in different forms. In the Middle Ages, when people believed in the existence of fairies, it/they appeared as fairies. In modern times, as soon as we hit the space age and people began to seriously ponder the possibility of life on other planets, it morphed into UFOs and MIBs. That’s the theory.

Sometimes the MIBs don’t appear in the standard BLUES BROTHERS black suits and fedoras, though. Sometimes, in what is perhaps a throwback to earlier times, they show up in black CLOAKS. History buffs and those in the goth community would give them style props for this, and be excited by the notion that, if the whatevers can appear as, um, whatever, then ANYthing, like say a vampire, is possible.