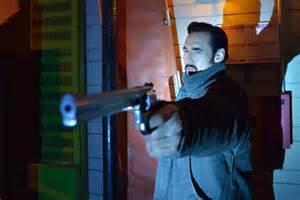 Okay, this is kinda turning into Vasiliy Fet week here at vampires.com, but it was an HOUR-long interview, I wasn’t provided with a transcript this time, and I’ve got a lot of ground to cover. If you’re not a fan of Kevin’s or THE STRAIN—why are you even on this site? I mean, um, hang in there. This is the last installment regarding the interview.

Durand said that he loves how the writers of the show “get” his character, a guy possessing a “warrior rage” who can go from “zero to 300 miles an hour in a second,” who is a “ninja” with his weapon of choice, a piece of rebar, familiar to him from his years exterminating vermin. He appreciated the dynamic that Fet, a regular guy of no great significance before the “vampocalypse” (his word) is now “necessary.” “He’s gotta save the world,” Durand said of his character, and is only getting “stronger” and “more competent” as things progress. Fet will not, Durand believes, become distracted by his romantic relationship with Dutch. Durand described Fet as “an onion,” and that, with each passing episode, layers are getting peeled away. Asked whether he prefers playing “good guys” or villains, Durand stated that he tries not to look at his characters as good or evil, instead trying to get to the heart of what makes them tick as a character, to reach “their minds and hearts and souls.” I say you’re doing a great job, Kevin. Keep up the good work.