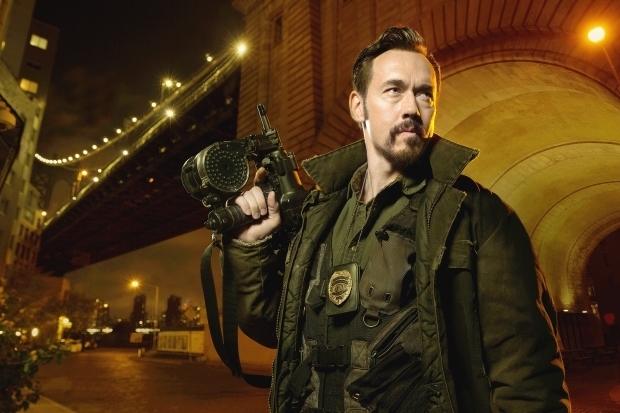 So what was my question, when I got out of the queue and got to speak with actor Kevin Durand of THE STRAIN one on one? I went back to a favorite theme of mine, the psychological/sociological aspects of the vampire myth. Why, I asked him, did he think the vampire is so prevalent and popular in our culture? Kevin didn’t disappoint by giving some stock, simplistic answer. I kinda figured he’d have something of substance to offer, even if we only had a few minutes to chat.

He spoke of how people in general are obsessed with things relating to “our demise” as living beings, pointing out that the same basic dynamic underpins the popularity of disaster movies as does the passion for vampire fiction. He commented on how works that are all “peaches and ice cream” just don’t connect with people in the same way, and that vampires possess a quality that is “strangely, horrifically beautiful.” I loved the poetry of that phrase, and told him I was going to quote him on it—which I just did. Along similar lines, Mr. Durand admitted to being, rather than grossed out by the makeup effects on THE STRAIN, “in awe” of them. The guy is just a big fanboy at heart.

More on the interview following.