For all practical purposes, the trope Vampire Lesbian emerged with Joseph Sheridan LeFanu’s novella “Carmilla.” Eventually, with the rise of a new medium–motion pictures–an adaptation of that story appeared. “Crypt of the Vampire” became one of the still-relatively few such. The trope, however, could be seen in “Dracula’s Daughter” as well as the eerie “Vampyr.” Later, Hammer films made an infamous trilogy full of scantily clad vampiresses sinking their fangs into pretty young women–“The Vampire Lovers” “Lust for a Vampire” and “Twins of Evil.” Curiously, the trilogy’s lesbian content faded a little more with each flick. Carmilla in the first showed deep emotional bonds with her waif-like victim Emma, while her food source of choice remained women. The same character in the second fell in love with a man. By the third, Carmilla had become a walk-on. She rose from the dead to have sex with a male descendant then turn him into a vampire (this version acted as a prequel–among other things explaining why Karnstein Castle was in ruins).

Other lesbian vampires followed. The title character in “Lemora” quietly (if fiercely) hungered for an underage girl. Vadim’s “Blood and Roses” dabbled with sensual feelings between vampiress and female victim. Other versions of “Carmilla” followed the idea, from the direct-to-video to fairly upscale versions like that on Polish TV and the “Nightmare Classics” version starring Meg Tilly and Ione Skye. On “Smallville” Lana was recruited by a whole sorority of lesbians, who seemed to view men as little more than slurpees that wiggled and screamed. Jeanette on “Forever Knight” seemed very attracted to a young woman at one point, while the flirtatiousness between Darla and Drusilla on “Angel” seemed pretty overt. It seems like hardly a female vampire in any television or motion picture of any length didn’t carry with them a sapphic air (the brides in “Bram Stoker’s Dracula” or Lucy on BBC’s 1968 “Dracula” plus those in “Dracula 2000” as well as “Van Helsing”). Others might as well have a t-shirt proclaiming their orientation (Pam on “True Blood” or the entire undead cast of “Lesbian Vampire Killers”).

Is this a complaint? Hardly!

But while the hints of vampiric lesbianism run rampant, depictions of male homosexuality among the living dead remain few and far between. Apart from Anne Rice‘s “The Vampire Chronicles” and some flirting between the two vampires-with-a-soul over time in “Angel”, there weren’t any overt male gay vampires until “True Blood” save for Count Kronstein’s son in “Tanz der Vampires.” One can read such subtext between Nick and his creator La Croix, yet when compared with the obviously physical relationship between Nick and Jeanette this requires some hand-waving.

So why the relative scarcity? Like most things in life, one has to imagine more than one reason exists.

One is the eroticism of it all, coupled with the fact that so many editors/directors/producers have been male. Without going into the reasons why, the idea of two women having sex together often functions as a turn-on for heterosexual males. In more repressed periods–the Victorian age, Hollywood during the Code, etc.–vampirism becomes a metaphor for sexuality. Is it any wonder this is sometimes carried further? For much of the 19th century, the limbs of furniture were covered for decency’s sake. Little wonder “Carmilla” with its description of (at the very least) an erotic fixation of one woman for another ended up as the fixation of an undead monster for their victim. The Hays Office, which demanded married couples have twin beds, trimmed the sound of Dracula’s death (little more than a groan) upon the re-release of the Bela Lugosi film. Homosexuality could be hinted at only through metaphor, and in negative terms. The vampire worked well for this–especially since many fans (and censors nearly always fail to comprehend this) don’t derive lessons from stories but a visceral thrill of experiencing something new, exotic, forbidden. Seen in this light, the scene between Countess Zalenska and the innocent-seeming girl who agrees to model for her in “Dracula’s Daughter” comes across almost as pornography (imagine it for a moment with a male artist and no supernatural element–the implications become more obvious).

A lot of change rolled in with the 1960s and 70s. Envelopes of all kinds were getting pushed in every direction, a little bit at a time. When it came to vampire films, the lesbianism grew less covert as nudity and actual blood began to make their appearances. Not coincidentally, this all happened at the same time pornographic films jumped forward in quality–becoming actual full-length movies with plots, some of them even good!

But while this metaphorical use of the lesbian vampire seems obvious, one doubts it is the only one. Another, simply, might be that writers saw a connection (appropriate or not) between homosexuality and the equally unnatural (or so-called) existence of a corpse living forever by drinking the blood of the living. By this argument, the only reason we see more lesbian rather than gay nosferatu is because the latter are going just a little too far (rather like the story–possibly apocryphal–of how covers for the novel “Jaws” were too terrifying when it was a man about to be devoured by the shark, because it echoed castration phobias).

Still another view might be one that equates the female more intimately with darkness, with shadows and moonlight. By this argument, women more easily find companionship with their own kind within the realm of eternal night. Not unreasonable in some ways, especially given the most ancient descriptions of vampires (the Lillitu of Sumer, the Hellenese Lamia, etc.) tend to be either death mothers or femme fatales. Such turns traditional (or at least old-fashioned) images of women on their heads. Instead of a life giver, the death mother vampire seeks to drink the blood of children. Likewise the doting wife and/or fiancée turns into a wanton devourer of her mate, not unlike the black widow. Not coincidentally, Lucy Westenra in “Dracula” fits into both tropes.

Here’s another possibility. Maybe on some level we recognize a biological aspect to all this. Human beings, despite our rhetoric, are not natural predators. Our teeth, unlike those of a cat or wolf (or a vampire’s), mark us as omnivores rather than carnivores. As a rule humans prefer to eat muscles–the stuff of scavengers rather than predators who eat internal organs by choice. Culturally, we are more likely to pair up in romantic couplings one-on-one, rather the way other primates do. Look at the social structure of wolves or big cats, though. There an alpha male has a harem (Dracula anyone? Or Count Yorga?), who are usually more dangerous than the alpha. The other pattern is for dominant females (black widow, praying mantis, the hyena, etc.). In both scenarios the females of the species spend more of their time with each other than with the opposite gender.

Which is true? All of them, sooner or later. 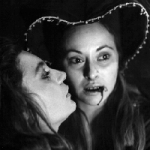 David MacDowell Blue blogs at Night Tinted Glasses.  He graduated from the National Shakespeare Conservatory and is the author of The Annotated Carmilla. and Your Vampire Story (And How to Write It) as well as a theatrical adaptation of Carmilla.