Way back in the 1970s, Hammer films had plans (never realized) to make a fourth Karnstein film as a follow-up to Twins of Evil.  The title was to have been Vampire Virgins. When I heard of the following graphic novel, little wonder if I wondered about any possible connection! 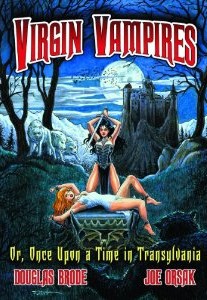 Virgin Vampires (or Once Upon a Time in Transylvania) proves to be something else. Its central conceit felt quite fun from the start. Circa 1860 or so, Bram Stoker (future author of the landmark novel Dracula) travels by stage in the wilds of Transylvania. Never mind that in real life Stoker did no such thing. He travels with none other than Joseph Sheridan Le Fanu, later writer of Carmilla. No, they didn’t know each other. Beside the point! The whole idea is that both seminal vampire works were inspired by the actual adventures of these two writers, including a special guest appearance by none other than Elizabeth Bathory, the “Blood Countess” herself!

Sound a bid lurid in a brainy kind of way? Well, that is fair as it turns out. Given the title alone, one expects a fair amount of sex, nudity and fangs.  Check! Plenty of all three, amidst a plot that pretty cleverly links/unites all its disparate elements. For example, Le Fanu’s bride is the victim of Bathory and much of his efforts in the story focus on trying to rescue her. Likewise, the initial plot of Carmilla turns out a retelling of what happened to a young lady who would one day marry Bram Stoker.

But how does it all fit together? Well, that proves more problematical. For one thing, the plot only ever manages to achieve clever. Not hilarious. Not insightful. Not moving. Likewise the titillation never really takes off. Honestly, the most intriguing thing that happens is a threesome–one where both women look alike (because Elizabeth Bathory is a shapeshifter, after all). Nothing as interesting as when the Brides almost rape Jonathan Harker, only to be interrupted by Dracula who snarls “This man is mine!” Granted, the inspiration for all this seems to be Hammer Films. Not the most highbrow of entertainments. Yet when one considers the edginess in much of Hammer’s vampire fare–incest, rape, desecration of churches, addiction, hints of pedophilia amid the murder of children, etc. I think it right to expect more from someone trying to emulate or at least offer an homage.

And let us talk about the art.  Not bad, not bad at all.  But a far cry from anything really worthy of praise.  Look at almost any edition of a Batman comic in the last thirty years, for example, to see just some of the

possibilities in drawing a cape! Not to get all puerile,  but for that matter when it comes to depicting eroticism–especially that associated with blood and death and sadism among other things–one can do some pretty amazing things with a visual medium. Not here. Just take a look at another graphic novel about vampires, Raptors (reviewed by yours truly earlier this year) and you can see what even such a straightforward thing as poses can show some real power.

But not in this.

Which isn’t to say the artwork fails at achieving clarity, competence or even some genuine charm. Frankly, it is superior to some. Yet this doesn’t go any further. Just as the story itself doesn’t feel terribly gripping. One follows along to see what happens next without really caring one way or another. Surprises? None, really. The story remains far too straightforward. No real twists and turns await us.

For example, the characters. They’re collections of characteristics to create plot points rather than people. Were there something else to balance this lack of humanity–a genuinely intriguing plot, or startling visuals–I’d be forgiving. But instead we get nothing but pretty pictures, a little more sex and nudity than on The Vampire Diaries and characters of really well-rendered cardboard.

Reading it was fun. I enjoyed it. But will I want to read it again? Ah, there’s the rub!

David MacDowell Blue blogs at Night Tinted Glasses.  He graduated from the National Shakespeare Conservatory and is the author of The Annotated Carmilla. and Your Vampire Story (And How to Write It) as well as a theatrical adaptation of Carmilla.

View all of david's posts.