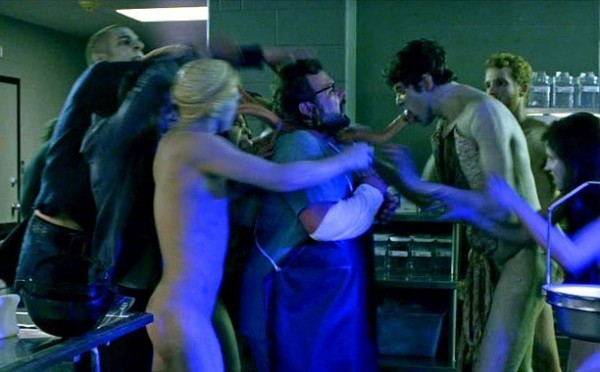 Progress report: I have now completed viewing the first season of THE STRAIN in its totality, and I can officially pronounce that I’m a complete mark. Everything about the show is top notch: the production values, the FX, the acting (with the exception of child actor Ben Hyland, who portrayed the part of Zach Goodweather—and did a piss-poor job of it, which is, I suspect, the reason the part was recast for the second season), and the writing are all superb. Not that I’m surprised. Anything with Guillermo Del Toro’s name on it, I have learned from experience, is pretty much guaranteed to be good.

Most of all, it is so refreshing to see, in this, the age of whiny, teen-angsty vampires with so little sinister about their natures that they have nothing better to do than crush on high school girls—the age of TWILIGHT, in other words—it is so refreshing to see REAL vampires again. Vampires that are genuinely scary, that are vicious, predatory, at times grotesque, and don’t at all resemble some sexually-frustrated goth girl’s idea of the perfect supernatural boyfriend. The Strigoi-style of vampires BITE—and in all the right ways. May THE STRAIN continue to spread its pestilence until the Master starts to sparkle!