The Vampire Diaries won’t return from its millionth hiatus until April 18. Another week to go! To tide you over until the big day I bring you a variety of spoilers on the remaining Season 4 episodes. Executive producer Julie Plec shared a few goodies with us fans. Check them out below! 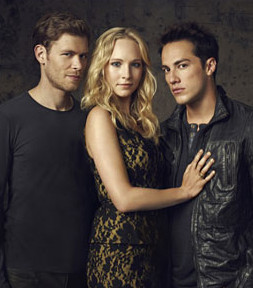 The Cure
Julie Plec revealed com that the cure WILL get ingested this season! She just didn’t tell us WHO would be drinking it. There are many who want it, but who gets it? Rebekah has already ingested a fake cure, Silas has demanded that Klaus hand it over, and Elena is threatening to go kill crazy unless the Salvatore brothers back off with the cure thing.

Silas
We discovered that Silas could transform into any being that he wants, however we will see his real face before season 4 ends.

Klaroline
We know that Klaus will be heading over to the “Originals” spinoff series, Plec teased that he “might be around to wish Caroline a happy graduation.”

Tyler’s Return
Tyler has been MIA ever since Klaus threatened to kill him. Yay!  But now he’s coming back. Boo! Yeah, I am not a Tyler fan. Reports say that Tyler will be back to “share one more pivotal moment with Caroline this season.”

Jeremey’s Ring
Remember Jeremy’s magical Gilbert Ring that brought him back to life a bunch of times (except, you know, that last time)? Elena took the ring off of his corpse and threw it at Damon. No one has seen it since, but Plec teased that “this may not be the last we see of that Gilbert ring.” Hmmm… I wonder who plays with it next?

What are your theories on the remaining episodes? Excited about the show’s return next week?