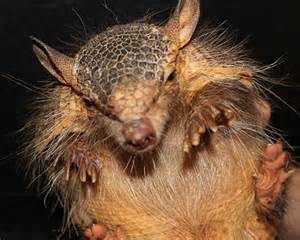 The number of Floridians contracting leprosy has doubled in the first half of 2015, mostly because of contact with spitting armadillos.

Not really. That’s just hyperbole to get your attention and, hopefully, get you to read this article. If you’re still here, it must be working. Armadillo saliva DOES pose a health risk, though. Armadillos are one of the few mammalian species known to carry leprosy, that wasting, necrotic disease once so feared a scourge that sufferers were forced into isolation. Even today, when the disease can be treated, we don’t understand for sure how it is spread. It’s caused by a bacterium, but continued exposure to it over a prolonged period seems necessary to pass the pathogen from a carrier to a new host. Usually, people living in leper colonies to care for the sick can remain there for years without contracting the disease. This may be the result of basic sanitation, as the pathogen is present in a victim’s saliva, mucus, etc. Things most people don’t like to get on them. Also, the caregivers are not EATING the afflicted.

They are, however, eating armadillos. This may explain why the disease is now spreading in the continental United States. We have a lot of armadillos. Are they good eatin’? I wouldn’t know, but I doubt they taste good enough to risk getting leprosy.