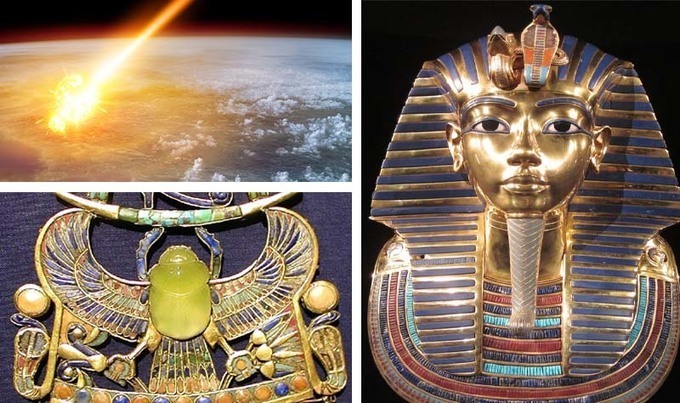 Geologists have determined the scarab on King Tut’s brooch was made from meteor glass formed 28 million years ago in the Saharan Desert.

My fascination with ancient Egypt goes back as far as my love of the Undead—which is to say it’s lifelong. I must have seen some documentary special on Egypt before I was even old enough to remember it, and it indelibly imprinted itself in my mind. Either that or I lived in the “Land of the Pharaohs” in a previous life. You know, po-TAY-to, po-TAH-to. I once, after seeing a special on PBS about how the Egyptians often mummified cats, tried it with my family’s own pet calico and some masking tape. That didn’t work out so well. (The cat lost some hair but was otherwise unharmed. Hey, look, I was a little kid, okay? Cut me some slack.)

Reading about King Tut’s medallion, fashioned of meteoric glass and interred with his mummy, I became that little wild-eyed weird kid again. My imagination set aflame, I envisioned the stone bequeathing special powers, even the power of life over death. Under a full moon, perhaps, or when exposed to direct sunlight, the mummy would rise to stalk the living! In real life this didn’t happen, unfortunately. Or at least it hasn’t happened YET. Maybe if we could just get Tut reunited with his brooch . . .