When I told my brother I was watching Twilight to review it, his response was ‘Go chop off your penis, as you clearly don’t deserve it anymore’. My sister, on the other hand, is utterly obsessed with the phenomenon and manages to tear herself away from MSN long enough to read the books at an ungodly pace. Such is the divide between people who like Twilight (i.e. females under the age of 17) and those who would rather sandpaper off their own face than sit through 2 hours of the creepy love story of Tinkerbell and his undead bride to be.

OK, so at this point I should probably make it clear that I sit in the latter camp. For me, Stephenie Meyer nearly single-handedly destroyed my love and obsession with vampires that I had carefully nurtured for half of my life. Having never seen the Twilight films before, I thought I’d give it a chance. So maybe when I first heard that vampires, according to Meyer, sparkled in the sun I thought my house mate was taking the piss (for Americans and others unfamiliar with this phrase, it roughly means ‘You have got to be fucking kidding me’), but I wouldn’t let that get in the way of this review. It’s not like I hate all chick flick films containing teenage angst. For instance, 10 Things I Hate About You is actually one of my favourite films. Come to think of it, when I was younger I enthusiastically read the Christopher Pike series of ‘The Last Vampire’ and some of the Nightworld books by L. J. Smith, so I can accept the idea of vampires, angst and love being in the same book/film, although perhaps with some scepticism now that I’ve grown up since then. Now that my credibility has officially been torn to shreds, let’s proceed shall we?

In case you’ve been sitting under a rock under another rock that was securely sealed in a titanium safe that was buried deep beneath the Earth in an otherwise uncharted part of Papua New Guinea, the Twilight series is set around the love story of Edward Cullen, the dreamy pale-faced vampire of the modern age, and Bella, the typical teen girl with the typical teen worries with her typical teen emotions set against a typical teen backdrop.

I’ll go out on a limb and say that the film isn’t as absolutely, gut-wrenchingly terrible as I had thought it might be, but it’s by no means great either. It’s rather far from great, as it turns out. As this is fundamentally a love story, one would expect a great deal of emphasis on the subtle emotions, the interplay between the characters and it all being a very clichéd but ultimately satisfying affair of watching two people fall for each other with some mishap along the way. That is, at least, the theory. The reality is that Edward flirts between creepy sexual predator with a dash of Edward Scissorhands and misunderstood but ultimately has a sense of fun Heath Ledger in 10 Things I Hate About You. This rather undermines the ability to have any emotional connection to the character and therefore his plight.

For instance, in the first scene where the young lovers first sit next to each other in Biology class, Edward sits there flicking between staring at her as if he’s hoping his stare will force her to spontaneously combust and acting like he’s trying really quite hard to conceal the fact he’s just prematurely ejaculated. That’s not dark, brooding and mysterious, that’s just fucking bizarre.

I have two main problems with Twilight. First is that it’s impossible to like Edward because he is just far too creepy. The kind of creepy you associate with someone that phones you up constantly just to breathe heavily down the phone line when you pick up. In one scene Bella wakes up (I say ‘wakes up’ because I assume she’s supposed to be sleeping, but it actually looks like she’s….well…) to find Edward standing by her bed. Then he vanishes. This is supposedly a dream until Edward later confesses to having broken into her room to watch her sleep ‘for months’. Either I am seriously out of touch with what women want, or that kind of behaviour is deserving of a restraining order, not looks of lust and talk of eternal love.

The fact that they fall in love so quickly just smacks of when sixteen year old kids get engaged because they’ve found ‘The One’, when everyone who isn’t seriously deluded know full well it’ll last a week at best. This, I guess, is fine for the target audience who are probably that age and think along those same lines, but surely the mark of a good story is when it has elements in it that other audiences can enjoy too? Take Toy Story. It’s a kids film but I absolutely love it, as do many other people who are in their 20’s, 30’s (etc.). It has humour and charm that other audiences can appreciate. Twilight has none of this. The dialogue is so badly written that in some scenes I couldn’t help but burst out laughing. This a serious scene does not make.

My second problem is that it’s literally impossible to find someone dark and brooding when they sparkle. If Aragorn had revealed that he had butterfly wings before the battle of Helm’s Deep in Peter Jackon’s film adaptation of ‘The Two Towers’, I can’t imagine that women would have portrayed Viggo Mortensen as a dashing sex icon with quite as much enthusiasm. Although Meyer does seem to put a rather literal spin on ‘knight in shining armour’, so maybe that’s something.

I will say that Edward does have one thing going for him. When Bella explores his CD collection, the song on his stereo was a track by Debussy and not, as I had suspected, My Chemical Romance’s ‘I’m Not OK’. It’d be nice to think that some teenagers will take some interest in classical music because of this, but if not it was a nice try all the same.

I tried to like this film. I really did. I even stopped half-way through the film to take a trip to the supermarket to pick up a bottle of rum because I thought it might improve my chances of liking it (it worked for ‘Jeepers Creepers 2’). The love scenes and dialogue are laughable, the acting is bizarre and it reduced a concept that used to be interesting in so many ways to the analogy of MTV friendly metal. Avoid. 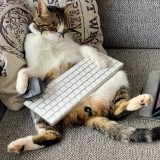 is a half-human, half-bastard hybrid who is convinced that no work desk is complete without a good bottle of rum and an annoying cat trying to lie across the keyboard. Currently doing an MA in Philosophy at the University of York, you can read more of his elaborate nonsense at sleepingunderenon.wordpress.com, or you can bug him via Twitter at @asleepunderenon

8 replies on “Twilight: the Nu-Vampire”

I cracked up, my husband cracked up, and since I read it aloud in front of my dogs, I think they rather enjoyed it too. Great piece, man.

I am proud Twilight neutral. I believe Stephenie Meyer had good intentions, to make story of supernatural love story with thrill of danger, and don´t get the whole “immorality” thing against these very tame books and films, when everybody else can churn whatever filth they want, but the lack of atmosphere – highschool is AWFuL setting to vampire story – and lack of entertainment value are the reason why I am not the fan. Romance between Bella and Edward is trite and unromantic, simply boring.

[…] You can read the rest here: https://www.vampires.com/twilight-the-nu-vampire/ […]

Hahaha! This is hands down my favorite Twilight review. Hilarious and well written! Loved it. Well done. :)

dude awesome article, PLEASE write about twilight more often! i laughed all throughout it. and your right twilight is laughable. i watched the movies and just wanted to laugh, but kept my mouth shut bc my twilight loving friend was there(a.k.a the reason i went) and then i read the books and still wanted to laugh. how can a sparly diamond creature be so dark and mysterious? and if people hadnt noticed bella falls for a dude, edward, who wants to kill her! (anyone else say Creepo?- or is that just me?)

I hate the twilight series. I use to think it was a cute little fantasy, but really it is terrible. The movies are even worse then the books. I am a teenage girl that hates twilight and my 38 year old mother loves it along with my aunt and her coworkers. I thought it would be entertaining if i went to a twilight movie premiere at the theater with all those scary twilight fans wearing an anti-twilight shirt…but then i might not live long…

I so agree. I don’t hate the books or the films but I seriously don’t get why people out of puberty would like them. The main characters are boring or plain stupid, but the worst thing was that many of the supporting characters where much more interesting but their potential was left to waste.