It’s April! A time of sunshine and vampire books! Hm, ok, not a good combination, but I am so sick of snow that the idea of sunshine and new books makes me a very happy lady. That said, I am thrilled to share with you all of the new vampire books hitting bookshops this month. There are some goodies coming out this April – check them out. 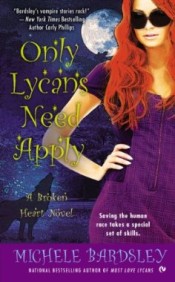 When I found the ancient tomb of the two most powerful vampires in history, I knew I was in for a lot of trouble…. But archaeologists like me, Moira Jameson, are ready for trouble. Okay, maybe not human-species-threatening trouble. Or the kind of trouble that arrives in the form of a sexy werewolf named Drake. Yeah. Werewolf. And I thought ancient curses and walking corpses were a joke. Um…not so much. ’Cause a walking corpse named Karn wants to reveal vampires, and all of parakind, to the humans. And everyone else thinks that’s a bad idea. Then a pyramid mysteriously appears in Broken Heart, Oklahoma, and I’m appointed to get inside, survive booby traps, and awaken two very old, very hungry vampires. Luckily, Drake has my back (and my front). Unfortunately, archaeology sometimes reveals some very nasty surprises. And I’ll have to decide between saving myself…or saving the world.
Coming out April 2, 2013.

Bite Me, Your Grace by Brooklyn Ann
London’s Lord Vampire Has Problems. Dr. John Polidori’s tale “The Vampyre” burst upon the Regency scene along with Mary Shelley’s Frankenstein after that notorious weekend spent writing ghost stories with Lord Byron. A vampire crazy broke out instantly in the haut ton. Now Ian Ashton, the Lord Vampire of London, has to attend tedious balls, linger in front of mirrors, and eat lots of garlic in an attempt to quell the gossip. If that weren’t annoying enough, his neighbor, Angelica Winthrop has literary aspirations of her own and is sneaking into his house at night just to see what she can find. Hungry, tired, and fed up, Ian is in no mood to humor his beautiful intruder…
Coming out April 2, 2013. 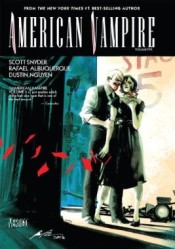 In the first story, series mainstays Skinner Sweet, Pearl and company return to Hollywood in the ’50s during the Red Scare. In a time where America was on the lookout for the next Communist threat, was the real danger something far more insidious? A major turning point in AMERICAN VAMPIRE lore begins here! In the second tale, familiar face and vampire hunter Felicia Book is “retired” from vampire hunting when she gets called back into action to track down and kill the most powerful vampire of all time. The hunt takes our heroes through post-war Europe, behind the Iron Curtain and into the heart of Russia to track this deadly enemy…
Coming out April 2, 2013.

Appalachian Overthrow: A Novel of the Vampire Earth by E.E. Knight
In the latest Vampire Earth novel, the national bestselling author tells a tale about David Valentine’s fellow freedom fighter Ahn-Kha when he was imprisoned and forced into hard labor by the Kurians—and the rebellion he led against them… Captured and sold to the Kurian–allied Maynes Conglomerate, to work as a slave in the coal mines of Appalachia, Ahn-Kha is angered and appalled by the dangerous working conditions, and the brutal treatment inflicted upon his fellow miners. When a protest against shortages is deliberately and bloodily suppressed, Ahn-Kha sets himself against the ruling Maynes family and sets out on a trail of vengeance through the Coal Country. Finally, the people of the Coal Country are driven to the breaking point—and they now have a leader, a powerful and battle-hardened leader, determined to forge them into an army that will wage guerrilla warfare against the Maynes family and their Kurian masters—and free the Appalachians from their tyranny…
Coming out April 2, 2013.

When Darkness Falls (The Alliance Vampires) by Heather Graham 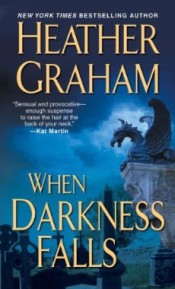 In an ancient cemetery, travel writer Jade MacGregor’s tour of a Scottish tomb is marred by a terrifying attack that leaves her surrounded by corpses drained of blood. A year later, back home on a shadowy French Quarter street, she glimpses the oddly compelling stranger she met that day. Coincidence – or is it something far more disturbing? Surrounded by her friends and engrossed in her work, Jade should feel secure. But then new bodies start showing up, and somebody is dogging her every move. Somebody who knows what she saw on that long ago afternoon among the gravestones and mausoleums. Somebody who will try to rescue her from the undead waiting to make her one of them.
Coming out April 2, 2013.

Who Was Dracula?: Bram Stoker’s Trail of Blood by Jim Steinmeyer
An acclaimed historian sleuths out literature’s most famous vampire, uncovering the source material – from folklore and history, to personas including Oscar Wilde and Walt Whitman – behind Bram Stoker’s bloody creation.
Coming out April 4, 2013. 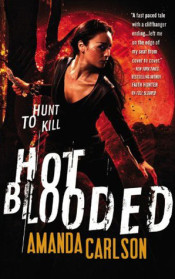 It hasn’t been the best week for Jessica McClain. Her newly found mate has been kidnapped by a Goddess hell-bent on revenge, and Jessica is positive she can save him. But being the only female werewolf in town comes with its own set of rules and powers… if only she understood them. Aided by two vamps, two loyal Pack members, and one very reluctant human, Jessica must rescue her man while coming to terms with what being a wolf really means. The second novel in the Jessica McClain series is a full on action adventure featuring one angry Goddess and plenty of monsters, demons, and a few newly risen beasties…
Coming out April 23, 2013.

Chosen at Nightfall (Shadow Falls) by C. C. Hunter
Don’t miss this magnificent final chapter in the breathtaking Shadow Falls series!  Kylie’s epic journey is about to lead her exactly where she belongs… When Kylie Galen entered Shadow Falls Camp, she left her old life behind forever and discovered a world more magical than she ever imagined. A place where you’re two best friends can be a witch and a vampire…and where love doesn’t happen the way you’d expect. When Kylie’s most powerful enemy returns to destroy her once and for all, there’s only one way to stop him—to step into her full powers and make a stunning transformation that will amaze everyone around her.  But her journey won’t be complete until she makes one final choice…which guy to love.  Should she choose to the werewolf who broke her heart but will give anything to win her back, or the half-fae who ran from their attraction before they had a chance?  Everything she’s learned at Shadow Falls has been preparing her for this moment—when her fate will be revealed and her heart claimed forever.
Coming out April 23, 2013.

NOS4A2: A Novel by Joe Hill 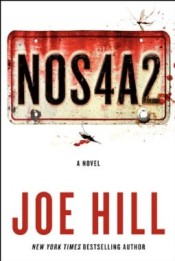 A different type of “vampire” novel. Victoria McQueen has a secret gift for finding things: a misplaced bracelet, a missing photograph, answers to unanswerable questions. On her Raleigh Tuff Burner bike, she makes her way to a rickety covered bridge that, within moments, takes her wherever she needs to go, whether it’s across Massachusetts or across the country. Charles Talent Manx has a way with children. He likes to take them for rides in his 1938 Rolls-Royce Wraith with the NOS4A2 vanity plate. With his old car, he can slip right out of the everyday world, and onto the hidden roads that transport them to an astonishing – and terrifying – playground of amusements he calls “Christmasland.” Then, one day, Vic goes looking for trouble—and finds Manx. That was a lifetime ago. Now Vic, the only kid to ever escape Manx’s unmitigated evil, is all grown up and desperate to forget. But Charlie Manx never stopped thinking about Victoria McQueen. He’s on the road again and he’s picked up a new passenger: Vic’s own son.
Coming out April 30, 2013.

Forbidden Feast: Book Three of the Eternal Dead Series by Joelle Sterling
In the town of Frombleton, government and law enforcement are run by vampires, and humans can’t get justice—particularly after the sun goes down. Holland Manning has been studying witchcraft at the elite Stoneham Academy. Having reached the rare pinnacle of Witch of the First Order, Holland is the only human who has the power to thwart the vampires’ heinous designs. She alone can save the town’s residents. While devising a plan to overthrow the vampire regime, Holland is appalled to discover that another threat to humans has found its way to Frombleton: a growing band of ravenous zombies are prowling the streets, devouring the vampire’s food source and challenging their seat of power. And to Holland’s horror, at the helm of the marauding flesh eaters is the recently returned love of her life, Jonas! No matter who wins, the human race is doomed unless Holland can make the arduous decision to choose victory over love.
Coming out April 30, 2013.

The Eternity Cure (Blood of Eden) by Julie Kagawa 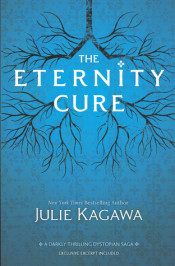 In Allison Sekemoto’s world, there is one rule left: Blood calls to blood. She has done the unthinkable: died so that might continue to live. Cast out of Eden and separated from the boy she dared to love, Allie will follow the call of blood to save her creator, Kanin, from the psychotic vampire Sarren. But when the trail leads to Allie’s birthplace in New Covington, what Allie finds there will change the world forever—and possibly end human and vampire existence. There’s a new plague on the rise, a strain of the Red Lung virus that wiped out most of humanity generations ago—and this strain is deadly to humans and vampires alike. The only hope for a cure lies in the secrets Kanin carries, if Allie can get to him in time. Allison thought that immortality was forever. But now, with eternity itself hanging in the balance, the lines between human and monster will blur even further, and Allie must face another choice she could never have imagined having to make.
Coming out April 30, 2013.

As Twilight Falls by Amanda Ashley
Photographing ghost towns across the American West, Kadie Andrews takes a wrong turn and ends up in Morgan Creek–a spot that isn’t on the map. It’s a quaint little place, but there’s something off about its complacent residents. And when twilight falls, it takes on a truly sinister air. . . Unable to run, or to find any way out, Kadie finds herself a prisoner, hunted for her blood. Still more disturbing, her spirit and beauty have captured the attention of master vampire Rylan Saintcrow. When he looks into her eyes, she can see his hunger. When he takes her in his arms, she can feel his power. When he presses his lips against hers, she can taste his need. Saintcrow may be the most compelling creature she’s ever imagined, but Kadie knows in her heart that he is also a man. A man who needs a woman. To want him, desire him, crave him. To be his willing prisoner–for all eternity. . .
Coming out April 30, 2013.

There you have it Dear Readers, all of the vampire books coming out this month. Which one are you look forward to the most?