It’s book time! *throws virtual confetti in the air* My favorite day is here, that magnificent day we take a peek at all of the vampire books coming out this month. A few fantastic books are coming our way this February. Check them out! 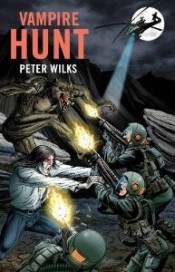 A humorous, vampire-themed fantasy action novel, that shifts between the 17th century and today. Opening upon the high seas in the 17th century, the vampire pirate ship, Bloodcrow, ambushes a merchant vessel. The screams of the dying and the thunder of the cannons from the attack have barely stopped revebrating when Nicholas Arden discovers he is in a love triangle with his betrothed, Sarah, and his own cousin, the charming ship captain, John Foulkes. While brooding over his loss, the ship is wrecked amongst reefs in a violent storm. Thrown overboard, Arden washes ashore only to discover a mysterious substance that gives him the knowledge to enable revenge. Fuming in helpless rage, Foulkes adopts the name of his ship Bloodcrow as his nom de guerre and he vows revenge on Arden when they eventually meet again, ensuring that the ramifications of Arden’s decision will haunt the human race for eternity. Moving to the present day….. Arden is now called Starbuck and is part of an elite crack force that is sent to recuse the British Foreign Secretary and his Russian counterpart when they are abducted from high level talks… Could it be that Bloodcrow and the vampires are behind the abduction? The ensuring battles claim victims galore on both sides and Starbuck must finally defeat Bloodcrow once and for all.
Coming out February 1, 2013.

Under the Gun (Underworld Detection Agency 4) by Hannah Jayne
Quick thinking and loyalty have taken human Sophie Lawson a long way in the UDA – along with a healthy dose of magic immunity. But when her old boss Pete Sampson asks for help after a mysterious two year disappearance, she’s determined to find out what high placed demon has put two ruthless werewolf killers on his tail. Of course, sucking up to her icy vampire department head and negotiating a treacherous interoffice demon battle are the kind of workplace politics that could easily get a “breather” way worse than reprimanded. And sexy fallen angel Alex is doing whatever it takes to heat up Sophie’s professional cool and raise feelings she’s done her best to bury. Too bad their investigation is about to uncover the Agency’s darkest secrets…and powerful entities happy to sign one inquisitive human’s pink slip in blood.
Coming out February 5, 2013. 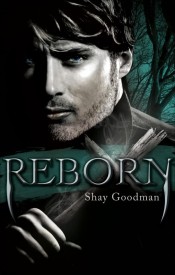 There was no breath coming from my lungs, yet I didn’t feel suffocated. I couldn’t feel my heart beat within my chest, but I knew I wasn’t dead. I was thirsty. The thirst was so strong it burned in my throat, and I knew what I wanted. I wanted blood. I could smell the sweet, delicious scent of human blood all around me, but I knew, even in my wild state that I didn’t want to kill anyone. That would make me a monster. I had to get out of there before I couldn’t stop myself.
Coming out February 5, 2013.

House Rules: A Chicagoland Vampires Novel by Chloe Neill
In a city full of vampires, trouble never sleeps. At the tender age of twenty-seven, Merit became a sword-wielding vampire. Since then, she’s become the protector of her House, watched Chicago nearly burn to the ground, and seen her Master fall and rise. Now she’ll see her mettle—and her metal—tested like never before. It started with two . . . Two rogues vanishing without a trace. Someone is targeting Chicago’s vampires, and anyone could be next. With their house in peril, Merit and her Master, the centuries-old Ethan Sullivan, must race to stop the disappearances. But as they untangle a web of secret alliances and ancient evils, they realize their foe is more familiar, and more powerful, than they could have ever imagined.
Coming out February 5, 2013. 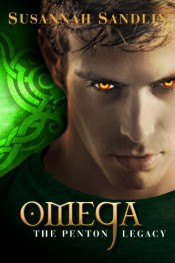 The bloody war between the Vampire Tribunal and the defiant scathe of Penton, Alabama, rages on, forcing its residents and their bonded humans to retreat into the underground fortress of last resort: Omega. There, Will Ludlam is charged with the care of Penton’s humans, though he longs to fight alongside his vampire brethren. He knows the risks: as the renegade son of the Tribunal’s vicious leader, Will’s capture could doom the resistance. Yet he is determined to prove his worth to his adopted scathe, to his vengeful father—and to former US Army officer Randa Thomas, his beautiful, reluctant partner. Randa has little faith that a former member of the vampire elite has what it takes to fight a war. But as their enemies descend upon Omega, Will’s polished charm—and Randa’s guarded heart—finally give way to the warrior within. Fans of Susannah Sandlin’s Penton Legacy are sure to devour this long-awaited third installment of the steamy paranormal series.
Coming out February 5, 2013.

Vampires in the Lemon Grove: Stories by Karen Russell
From the author of the New York Times best seller Swamplandia!—a finalist for the Pulitzer Prize—a magical new collection of stories that showcases Karen Russell’s gifts at their inimitable best.
Coming out February 12, 2013.

The Indigo Spell: A Bloodlines Novel by Richelle Mead 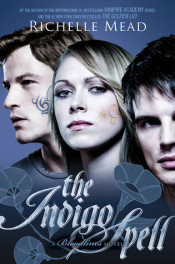 Sydney Sage is an Alchemist, one of a group of humans who dabble in magic and serve to bridge the worlds of humans and vampires. They protect vampire secrets—and human lives. In the aftermath of a forbidden moment that rocked Sydney to her core, she finds herself struggling to draw the line between her Alchemist teachings and what her heart is urging her to do. Then she meets alluring, rebellious Marcus Finch–a former Alchemist who escaped against all odds, and is now on the run. Marcus wants to teach Sydney the secrets he claims the Alchemists are hiding from her. But as he pushes her to rebel against the people who raised her, Sydney finds that breaking free is harder than she thought. There is an old and mysterious magic rooted deeply within her. And as she searches for an evil magic user targeting powerful young witches, she realizes that her only hope is to embrace her magical blood–or else she might be next.
Coming out February 12, 2013.

Eternal: Zachary’s Story (Tantalize) by Cynthia Leitich Smith and Ming Doyle
Reckless guardian angel Zachary has an unusual assignment. He’s meant to save the soul of Miranda, high-school theater wannabe turned glamorous royal vampire. Completely devoted to Miranda, Zachary takes his demotion to human form in stride, taking a job as the princess’s personal assistant. Of course, this means he has to balance his soul-saving efforts with planning the Master’s fast-approaching Deathday gala. Vivid illustrations by Ming Doyle elevate this darkly funny love story to a new dramatic level with bold black-and-white panels.
Coming out February 12, 2013. 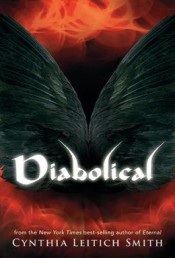 When “slipped” angel Zachary and his werewolf pal, Kieren, arrive under suspicious circumstances to a mysterious New England boarding school, they quickly find themselves in a hellish lockdown with an intriguing assortment of secretive, hand-picked students. Plagued by demon dogs, hallucinatory wall décor, a sadistic instructor, and a legendary fire-breathing monster, will they somehow manage to escape? Or will the devil have his due? Best-selling author Cynthia Leitich Smith unites heroes from the previous three novels in the Tantalize Series – including Zachary’s girl, Miranda, and Kieren’s love, Quincie – along with a fascinating cast of all-new characters for a suspenseful, action-packed clash between the forces of heaven and hell.
Coming out February 12, 2013.

Dance in the Vampire Bund Omnibus 2 by Nozomu Tamaki
This omnibus edition contains volumes 4-6 of the hit manga series Dance in the Vampire Bund. Mina Tepes, the princess of vampires, has set up a special district for vampires off the coast of Tokyo. Mina’s extensive preparations include founding a school that she herself attends, along with her passionately loyal werewolf bodyguard, Akira, in tow. Ever since the day the school opened, rival vampire factions have opposed Mina’s grand vision. They continue targeting the human populace in order to smear Mina’s reputation and sabotage her well-laid plans of vampires and humans living together in peace.
Coming out February 19, 2013.

The Curse of Dracula by Marv Wolfman, Brendan Wright and Gene Colan 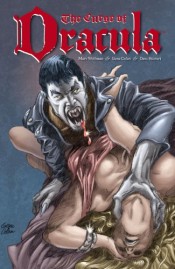 The Curse of Dracula is back in this deluxe new hardcover edition, a fitting tribute to the immortal legacy of artist Gene Colan! A mysterious, charismatic figure is moving amongst the circles of San Francisco’s political elite, hunting for the right candidate. When Jonathan Van Helsing and his team of vampire hunters come to town investigating a string of grisly murders and stumble into a pit of blood-soaked horrors, they know it’s only a matter of time before they come face-to-face with the master of the dark! But are they too late to stop Dracula’s terrifying plan to become the power behind the president of the United States?
Coming out February 26, 2013.

Edge of Dawn: A Midnight Breed Novel by Lara Adrian
Twenty years after the terror of First Dawn—when mankind learned that vampires lived secretly among them—the threat of violence reigns as the two species struggle to coexist. The only group preserving the fragile harmony is the Order, an elite cadre of Breed warriors dedicated to protecting humans and vampires alike. And in this precarious world of torn loyalties and shattered trust, Mira, a fiery squad captain, finds that every fight bears an intensely personal cost. Raised among the Order, Mira has always believed in the warrior’s code of swift—and even lethal—justice. But the one thing she desires more than the Order’s hard-won acceptance is Kellan Archer, a sexy but troubled Breed fighter. In love with him since childhood, Mira once broke through his tough exterior during an unexpected night of rapture, but the next day he mysteriously disappeared, never to return. Kellan didn’t think he would ever see Mira again—or have to confront the truth of why he left. After abandoning the Order years ago, he now leads a band of human rebels intent on carrying out their own vigilante rule of law. Yet a high-profile kidnapping assignment brings him face-to-face with the past he sought to avoid, and the striking woman he has tried desperately to forget. And as tensions mount and the risk of bloodshed grows, Kellan and Mira must take sides—between the competing missions that dominate their lives, and the electrifying passion that claims their hearts.
Coming out February 26, 2013.

Vampires in the New World by Louis H. Palmer III

Vampires in the New World surveys vampire films and literature from both national and historical perspectives since the publication of Bram Stoker’s Dracula, providing an overview of the changing figure of the vampire in America. It focuses on such essential popular culture topics as pulp fiction, classic horror films, film noir, science fiction, horror fiction, blaxploitation, and the recent Twilight and True Blood series in order to demonstrate how cultural, scientific, and ideological trends are reflected and refracted through the figure of the vampire.
Coming out February 28, 2013.

There you have it Dear Readers, the vampire books coming out this February. Any you plan on picking up?