Happy New Year! It’s a whole new year, a new beginning, one hopefully full of vampires! Now it’s time to look at all of the fangtastic books being released this month. There are a lot of highly anticipated books coming out this January. And even better, we have a lot of awesome comics heading our way as well. Check out the books and comics coming out in January.

Morbius the Living Vampire #1 by Joe Keatinge and Richard Elson 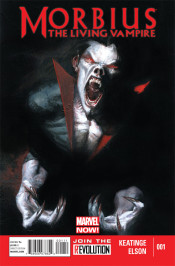 Morbius….the hunted, haunted fugitive. Morbius…the dead souled scientist. Morbius…the Living Vampire. Somewhere inside Doctor Michael Morbius is a good man who just needs a second chance. After escaping from The Raft in Amazing Spider-Man 699.1, Morbius is scraping desperately through each day trying to carve out a life in a world that has turned its back on him. However his redemption…may be worse than his sin. NOW Morbius returns in this long-awaited ongoing series, where the line between hero and villain becomes brutally and bloodily blurred.
Coming out January 02, 2013.

I, Vampire #15 by Joshua Fialkov and Andrea Sorrentino
Mary and company continue to piece together the secret of what turned Andrew evil — and the answer lies with Cain, the first vampire!
Coming out January 02, 2013. 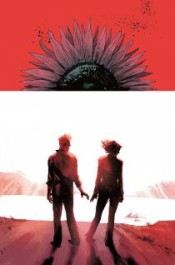 The Blacklist” is over. Lives have been shattered, alliances destroyed. Skinner and Pearl have made it halfway through the twentieth century and AMERICAN VAMPIRE hits a major turning point in the series.
Coming out January 02, 2013.

True Blood: Investigating Vampires and Southern Gothic (Investigating Cult TV) by Brigid Cherry
As seen in HBO’s True Blood, vampires have never been more edgy. Since its launch in 2008, Alan Ball’s adaptation of The Southern Vampire Mysteries by Charlaine Harris has exploited the creative freedoms of the HBO brand and captured a cult audience with its passionate, blood-drenched visuals and stories. From viral webisodes depicting vampires announcing themselves on TV, to the steamy title sequence, and the show’s uninhibited use of language, sex, and gore, True Blood has quickly gained status as cult TV with bite. True Blood posed the question of what would happen if vampires “came out of the coffin” and this book considers the representations of sexuality, race, and class in a series that engages directly with prejudice and civil rights. It also considers True Blood’s generic roots in television horror, paranormal romance, and Southern Gothic, the wider contexts of fairy tales and religion, the marketing of the series and the activities of its fans. Written for fans and scholars, the book explores the hidden depths of True Blood’s vampire bars, small town communities, and haunted bayous.
Coming out January 08, 2013.

Prince of Power by Elisabeth Staab 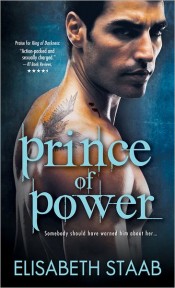 Wizards and vampires have been mortal enemies since the beginning. Now Anton, son of the Wizard Master, has one last chance to steal the unique powers of the vampire king’s beautiful sister, Tyra…and then kill her. But when he meets Tyra face-to-face, everything changes… Tyra will stop at nothing to defeat the wizards, until Anton saves her life and she suddenly sees an opportunity she never could have imagined… As the sparks ignite between them, together they could bring an end to the war that’s decimating their people, but only if they can find a way to trust each other…
Coming out January 08, 2013.

Eighth Grade Bites #1: The Chronicles of Vladimir Tod by Tony Lee and Heather Brewer
Heather Brewer’s The Chronicles of Vladimir Tod series finally makes the move to graphic novels! Thirteen-year-old Vladimir Tod really hates junior high. Bullies harass him, the principal is dogging him, and the girl he likes prefers his best friend. Oh, and Vlad has a secret: His mother was human, but his father was a vampire. With no idea of the extent of his powers, Vlad struggles daily with his blood cravings and his enlarged fangs. When a substitute teacher begins to question him a little too closely, Vlad worries that his cover is about to be blown. But then he faces a much bigger problem: He’s being hunted by a vampire killer.
Coming out January 10, 2013. 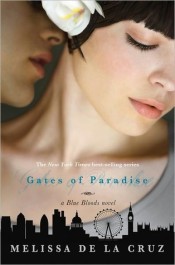 Schuyler Van Alen is running out of time. The Dark Prince of Hell is storming the Gates of Paradise, intent on winning the heavenly throne for good. This time he has his greatest angels by his side, Abbadon and Azrael—Jack and Mimi Force, as they are known in the Coven. Or so he thinks. Even as Lucifer assigns Jack and Mimi the tasks of killing their true loves, the Force twins secretly vow to defeat the Dark Prince once and for all. But how far will Mimi and Jack go to conceal their real loyalties? Meanwhile, former vampire Bliss Llewellyn has joined forces with Lawson, the greatest wolf of the underworld, to free his people from their imprisonment in Hell. As they struggle against impossible odds, an ancient message, woven into the very fabric of time, reveals just how much depends on the success of their mission. Lucifer seeks the key to the Gate of Promise, and when Schuyler is taken captive and delivered straight to Hell, she must make an unthinkable choice—the same one the archangel Michael was forced to make during the Crisis in Rome. Will Schuyler find the strength to do what he could not? The epic, heartbreaking Blue Bloods series comes to a close with this final novel about staggering courage, unbearable sacrifice, and the immortality of true love.
Coming out January 15, 2013.

Blue Bloods: The Graphic Novel by Melissa de la Cruz, Robert Venditti and Alina Urusov
For this elite group of teenagers, New York is all about parties, fashion…AND BLOOD. The sexy and secretive world of the Blue Bloods comes to life in this stunning graphic novel adaptation of Book One of Melissa de la Cruz’s best-selling series.
Coming out January 15, 2013. 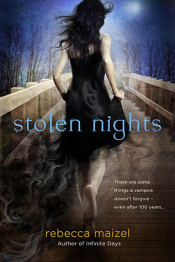 A new year is beginning at Wickham Boarding School. A new chance at life, at reversing the evil in my past. But nothing is ever as simple it seems… Last year, the love of my life died performing a ritual to fulfill my one wish and make me human. And now I’ve performed the same ritual for my friend Vicken – and survived. Why am I here, back safe on Wickham campus? The strong magic I used in the ritual did more than just make Vicken human. It drew someone to Lover’s Bay who does not belong here. She wants the ritual. Then she wants me dead. And she will take down any and everyone in my life to get what she wants. As if that weren’t enough, the ritual has also summoned the anger of the Aeris, the four elements and most fundamental powers on earth. They have a surprise and an unbearable punishment for me – like stepping into the sun for the first time, only to be put into a cage. And now I have to make an impossible choice – between love or life, yearning or having, present or past…
Coming out January 29, 2013.

The Prey (Hunt) by Andrew Fukuda
With death only a heartbeat away, Gene and the remaining humans must find a way to survive long enough to escape the hungry predators chasing them through the night.  But they’re not the only things following Gene.  He’s haunted by Ashley June who he left behind, and his burgeoning feelings for Sissy, the human girl at his side. Their escape takes them to a refuge of humans living high in the mountains.  Gene and his friends think they’re finally safe, but not everything here is as it seems.  And before long, Gene must ask himself if the new world they’ve entered is just as evil as the one they left behind.  As their enemies close in on them and push Gene and Sissy closer, one thing becomes painfully clear: all they have is each other…if they can stay alive. Chilling, inventive, and electrifying, The Prey is the second book in Andrew Fukuda’s The Hunt series.
Coming out January 29, 2013. 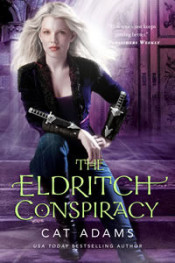 Celia Graves was once an ordinary human, but those days are long gone. Now she strives to maintain her sanity and her soul while juggling both vampire abilities and the powers of a Siren.  Not every bride needs a bridesmaid who can double as a bodyguard. But Celia’s cousin Adriana is no ordinary bride: she’s a Siren princess, and she’s marrying the king of a small but politically important European country. She’s getting death threats from fanatics who want to see the whole Siren race wiped out—including Celia herself, who is half Siren. Luckily, Celia is on duty when a trip to a bridal salon is interrupted by an assassination attempt, so everyone survives. When Adriana returns to the Siren homeland to try to prevent a coup, Celia is free to hunt for the terrorists and the vile mage who is helping them (while keeping her eyes open for the perfect maid-of-honor dress). Assuming the bride and groom both live to see their wedding day, this will be one royal wedding no one will ever forget.
Coming out January 29, 2013.

There you have it Dear Readers. A lot of fantastic books are coming out this month! Which books are you looking forward to picking up?