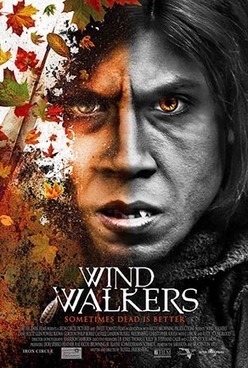 Wind Walkers Takes the Last Spot of the Horror Festival

The final slot has been filled for the After Dark Horror movie marathon set to hit theaters in limited release this October 16th, and it offers a unique American Indian twist to the genre. “WIND WALKERS digs deep into Native American history and the Psyche of our shared yet tortured pasts. It explores the nature of what it means to be cursed as an individual and as a community. The gradual withering away of the collective soul and all that makes us human is on display in this horrifying tale of the violent rebalancing of natures scales,” says Stephanie Caleb of After Dark. She didn’t really tell us a lot, but what she did say sounds intriguing.

The eight films we are meant to die for are, in no particular order: RE-KILL; MURDER IN THE DARK; THE WICKED WITHIN; LUMBERJACK MAN; SUSPENSION; UNNATURAL (This is the one I’m most excited about. It features a genetically-altered giant bear, and sounds like the kind of old-fashioned monster movie I go gaga for.); BASTARD; and now WINDWALKERS. Now if only they’d release the films somewhere within a million miles of where I live. . . *sigh* I’d die to see them.