What’s so scary about a black cloak, anyway? 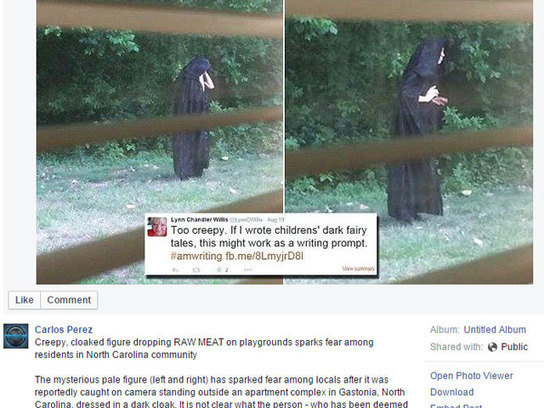 It looks like the mystery may be solved about a photo circulating around the Internet that created a buzz online.

A hooded figure, spotted near a playground close to an apartment complex in Gastonia, North Carolina, and subsequently captured in a series of photographs, led to public concern (we’ll be charitable and not say “panic”) and a police investigation. The cloaked figure was reputed to be carrying raw meat in her hand or, alternately, to be dropping pieces of it on the ground. That’s it. And people freaked out and called the cops. Did the figure threaten anyone? Did the figure cause harm to any public property? Was the figure even guilty of trespassing? Nope. No one had interactions of any kind with the “playground phantom.” No vandalism occurred anywhere the phantom was reported. And, as the sightings were all recorded in public places, there was no question of trespassing. The most the shrouded figure might potentially be guilty of is feeding stray cats. Yet they called the cops. And the cops investigated.

Turns out the mystery figure was just a teenage girl posing for some pictures for a school project. We know because her mama, upon seeing her daughter in the news, called in to inform the community at large that they could all relax and the police could call off their manhunt. I don’t know why she bothered. It’s not like the cops have actual crimes to investigate or anything.