It’s finally here! This was the episode I had been waiting for, the big magical adventure that led to a mysterious island. Episode 4.13, Into the Wild, was an interesting episode, but was it everything I had hoped for? Check out my thoughts below and share yours in a comment.

Official episode description for “Into the Wild:” 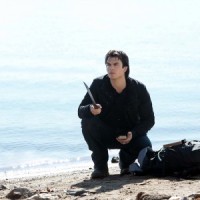 “MYSTERIOUS ISLAND — Shane (guest star David Alpay) leads an expedition to a desolate island off the coast of Nova Scotia, where he believes the secret of the cure lies hidden. On the trek to the island’s interior, Rebekah (Claire Holt) and Elena (Nina Dobrev) continue their bitter rivalry, Stefan (Paul Wesley) does his best to keep the peace, and Damon (Ian Somerhalder) accuses Shane of leading them into a trap. Bonnie (Kat Graham) and Jeremy (Steven R. McQueen) try to figure out the message of the Hunter’s mark, while Shane reveals more of the legend of Silas and the witch Qetsiyah, along with his own personal history. Back in Mystic Falls, Tyler (Michael Trevino) confronts Klaus (Joseph Morgan), and Caroline (Candice Accola) is caught up in the violence that follows. Michael Allowitz directed the episode written by Caroline Dries (#413).”

I loved the mystery and magic of the episode, however, I wish more progress would have been made. A good chunk of the episode was about Tyler, Caroline and Klaus, and the rest was the gang trying to find Jeremy. I would have liked more. One interesting thing that came out of the episode was Shane’s flashback. My theory is that Shane wasn’t really seeing his wife’s spirit. That it was actually Silas tricking Shane into releasing him by making him think he could get a loved one back. I guess we’ll have to wait and see if that’s true.

Here are a few things I liked and didn’t like.